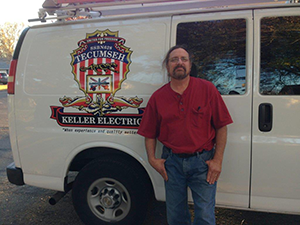 After High School, in 1973, I joined the US Navy. I went to Electricians Mate School at NTC San Diego. I learned electrical theory, motors and controllers, electrical operation and troubleshooting skills. Then I went to Nuclear Power School at Mare Island Naval Shipyard learning about the theory and operation of nuclear power. After graduation from NPS, it was on to reactor prototype in Idaho Falls, Idaho. There I received practical experience operating a reactor and electrical power plant in a model submarine engineering space.

I am a member of The Order of the Blue Nose for crossing the Arctic Circle on my first patrol. After I was honorably discharged, I worked for Preston Electric wiring custom residential projects and remodels. In 1986 I received my Master Electricians license and in 1987 I went into business for myself.

After many years of wiring custom homes, in 2004 I became a Mr. Electric franchisee. At MRE the focus was on service work and small jobs.

In 2012 I sold my franchise becoming independent again as Keller Electric Inc. I still focus on service work, small jobs and remodels.